It’s fair to say that one of the areas where Nintendo has excelled is local multiplayer gaming. One of the most popular franchises for couch gaming is the Mario Party series. First appearing on the Nintendo 64, the Mario Party series has become known as a game that combines board game-style mechanics with fun mini-games based on Nintendo’s major franchises. A few years ago, Nintendo announced that they were bringing Mario Party to the 3DS. Of course, many questions were asked: How would it work without couch gameplay? What about portability? Finally, we have those answers. Unfortunately, these answers are not necessarily positive.

Mario Party: Island Tour for 3DS tasks you with playing against the computer or a group of friends (via download play, discussed later in this review), in a board game-style mode. On the surface, it looks like a very simplistic game, but Nintendo has thrown a few wrenches in the works to keep the game fresh and different. For example, with one of the boards, the goal is to collect as many stars as possible throughout the game, instead of being the first to finish. 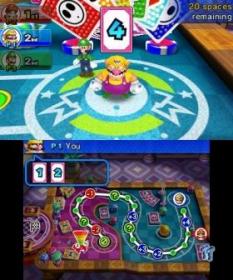 There’s a lot to love about Mario Party for 3DS. First, the game has translated pretty well to the small screen, and minigames generally take advantage of all 3DS offerings (although 3D mechanics aren’t specifically used, likely because of the 2DS). Sometimes you’ll be asked to play a minigame with just the analog stick, while other times the stylus can come into play. There are eighty minigames in total, and that’s not where the problems of Mario Party 3DS are. 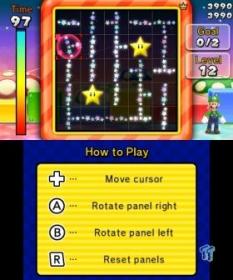 There have also been some changes to the game to make it more bitter on the 3DS system. First of all, the boards are noticeably smaller in general than those found on console games. This leads to games finishing in about an hour, which is fine for the portable format. One of our games was finished in twenty minutes, so it’s clear that Nintendo correctly understood that changes needed to be made to make the game portable. On top of that, there’s a secondary game mode that focuses purely on mini-games, and that’s where we spent most of our time after completing the board games on offer.

However, the game is not without its problems. First of all, multiplayer is only supported on local devices, so if you want to play online, you’re out of luck. This is kind of a big downside for the game, but on the plus side, the game allows downloading. A single player needs the game cart (or digital download) to install, and the game can be temporarily downloaded to other devices during gameplay, using Wi-Fi connectivity. This is actually a decision clever and a surprise.

We wouldn’t have been surprised to see a system-required game, but it’s a very smart move, and one that makes the game even more appealing to those with lots of friends with 3DS systems.

This ties in a bit with our other issue with the game, which is the boards. In general, the boards are good, and the rework for the smaller system (and the shorter time frame, you usually have to play it on a ride) is well done, but there are some boards present in the game that can’t be played without other human players.

For a handheld game, that’s a pretty pointless thing to do, and when you can get through the other boards in about two and a half to three hours of gameplay, it can easily leave you with nothing else to do. Secondary game modes really come into play with this, and prevent the game from suffering even more from these decisions made by the developers. 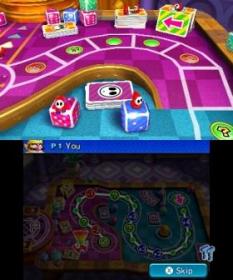 We mentioned before that we think Nintendo is really starting to take off with 3D technology, and that remains the same here. The 3D work in this game is stunning to say the least, and the visuals jump out at you. Sometimes a character will be thrown towards the screen, and there are other 3D tricks this game has up its sleeve. That’s not to say that if you only have a 2DS system you miss a lot of the game, but it’s absolutely better on the 3DS system.

Visually, the game stacks up pretty well and almost perfectly translated the larger console game onto the smaller system. The game runs without frame rate drops despite there often being a lot of action going on, and the character visuals are also well done. There is a wide variety of environments on offer; although many boards contain only one theme, which is a bit disappointing compared to larger consoles. The sound effects and music are quintessentially Nintendo, with the characters muttering their trademark “woohoos” and the like, and the music is quite upbeat and catchy. 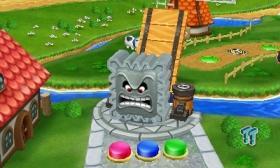 Mario Party: Island Tour was a game that made us wonder why it existed when it was announced. On paper, picking up a game that requires couch play and portable-ported friends seemed like a bit of a silly idea that just wouldn’t work. However, we were mostly wrong. The game isn’t without its issues, but the addition of download play, along with plenty of game modes for the single-player component, really prevents this from being a game you should steer clear of.

Mario Party: Island Tour isn’t a top-tier 3DS game, and it definitely takes friends with systems to play properly, but if you’ve got that and a few free hours, you might find something to like.

PRICING: You can find Mario Party: Island Tour for 3DS on sale below. The prices shown are valid at the time of writing, but may change at any time. Click the link to see the latest prices for the best deal.

This week’s next Animal Crossing: New Horizons update brings a slew of new features to the game on March 18, but Nintendo also has an additional surprise in store for next week. According to Nintendo’s website, Island Tour Creator will launch on March 23 as a “limited-time web service currently scheduled to be available until […]

Prince Edward and his wife the Countess of Wessex have canceled part of their upcoming royal Caribbean tour at short notice. The royal couple were due to travel to Grenada as part of a six-day trip from Friday which will see them visit a number of countries to celebrate Queen Elizabeth’s Platinum Jubilee year. It […]