Food is a big deal at Villa Love Island. Creating breakfasts for others allows islanders to express their love or apologize. Who could forget when Jamie made Camilla an avocado toast for her birthday? Or Curtis wanting to make everyone coffee in the morning to avoid cuddling Amy? And snacks are important too. Montana Brown was known for constantly snacking while watching all the drama unfold. And this year, with the resident Italian stallion, we got to see Davide cook up some amazing pasta dishes, with the help of Ekin-Su of course.

However, while we get hints of what the islanders eat, we really only see them having midnight snacks or having their morning cereal. Luckily, over the years, many former islanders have shared all of the food secrets at Villa Love Island. They’ve spilled the beans on what they eat for lunch and what takeout they’re allowed to have on weekends.

Here’s everything you need to know about food on Love Island:

They cook their own breakfast

Breakfasts are a big part of Love Island. They are a way to express how you feel about your partner. You can make a nice avocado toast to express your love or don’t offer them an iced coffee to show you’re pissed.

The reason breakfast potentially means so much is because it’s the only meal of the day the islanders cook for themselves, i.e. the only chance they have to show off their talents. culinary.

The villa kitchen is fully stocked with bread, cereal, eggs, avocado and plenty of fruit for their most important meal of the day.

Their other meals are covered 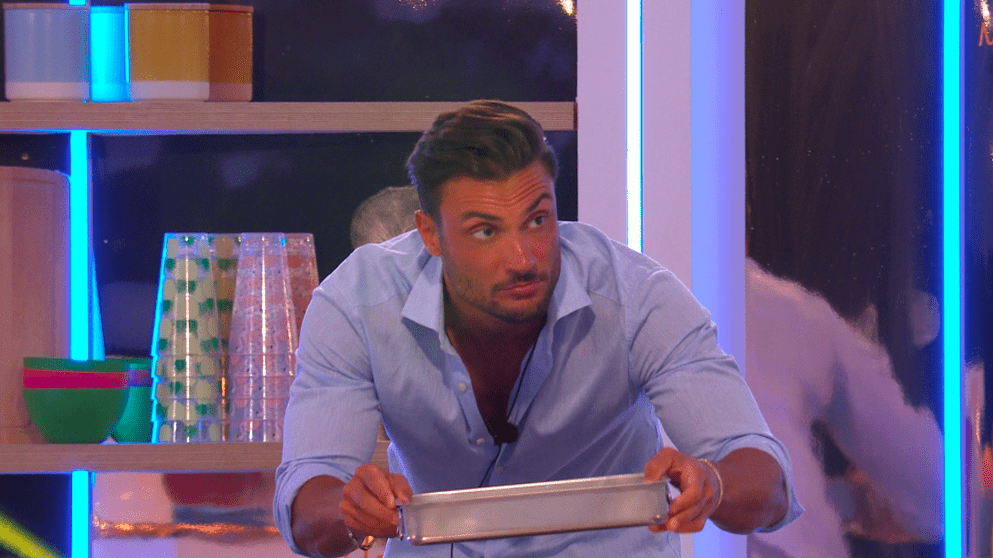 Although they cook their own breakfasts, islanders are catered for during lunch and dinner. A catering company sets up a catering station outside the villa to provide food for the islanders and production staff.

During these meals, the boys and girls are separated and they are forbidden to talk about what is happening in the villa because it is off camera. The production crew also often uses these meals to tell islanders to tidy up, on laundry day, and ask what they want for breakfast the next day, according to former islander Olivia Attwood. They’ll also use this as a chance to recharge the islanders’ microphones since they don’t need them when off camera.

Meals are usually BBQ meats, burgers, ribs and salads and this year’s Casa Amor boys Samuel Agbiji and Jack Keating loved the jerk chicken meal they once had in an interview with Closer. 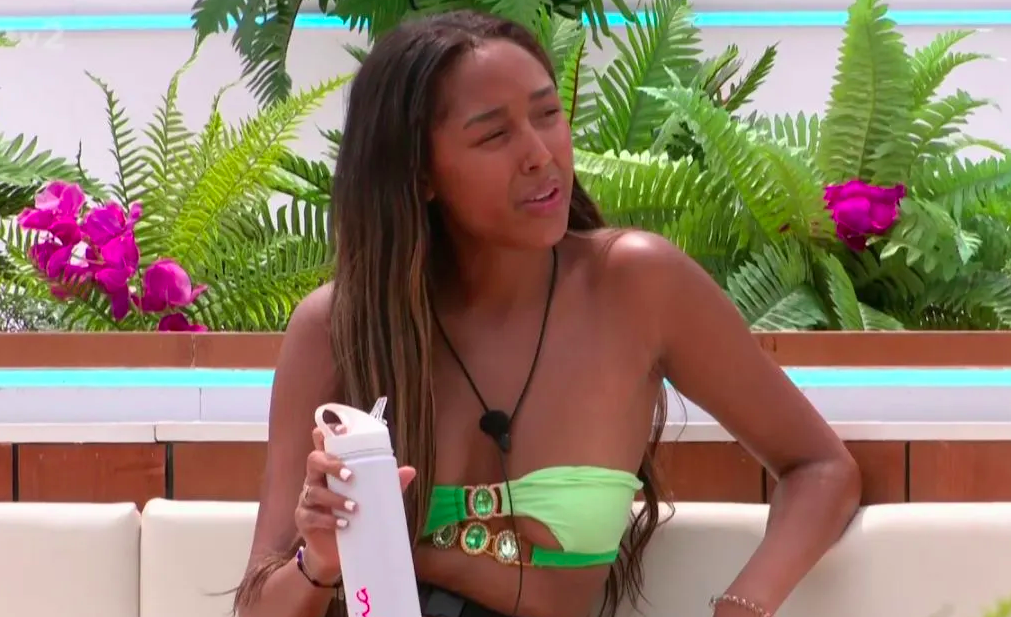 If the islanders have special dietary needs, these are taken care of. This year’s islander, Afia Tonkmor, who is vegan and allergic to fish and nuts, said she received her own vegan meals in special containers, which shocked the rest of the islanders.

She said: “Everyone acted like I was sick there when I said I was vegan. Every day he came with this special little container, all by himself, with my food allergies too It was so awkward.

“The food was really good, they served me so well. I am allergic to fish and nuts and they kept it separate.

They have meat on Mondays 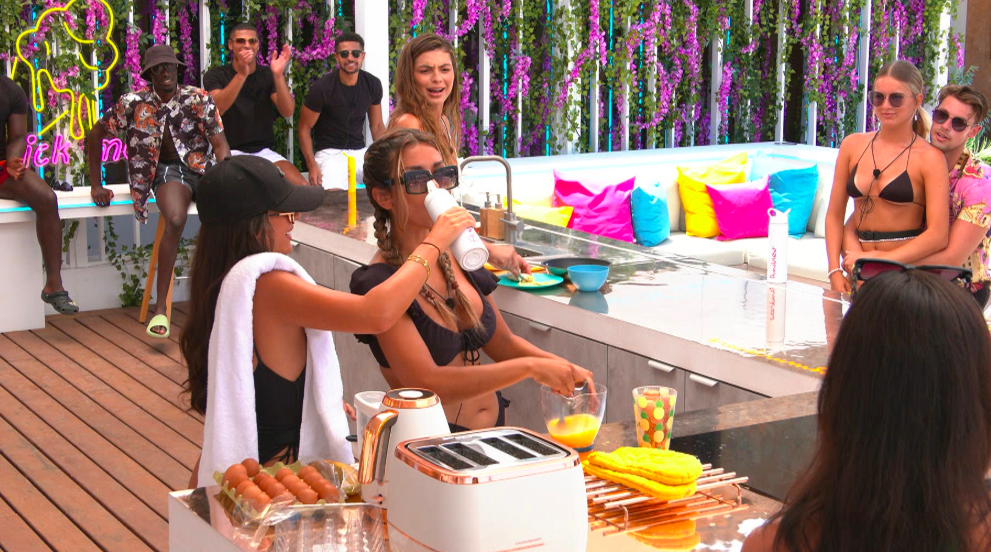 Other islanders may not have liked Afia’s vegan food, but every Monday they have a meatless day. According to Chef Ferenc, who handles the show, they only serve vegetarian or vegan food to the entire crew.

He said: “On Monday we only do vegetarian and vegan food so lots of options. Every week, every week.

“We started last year – and last year people weren’t really happy with that – but this year they are.” 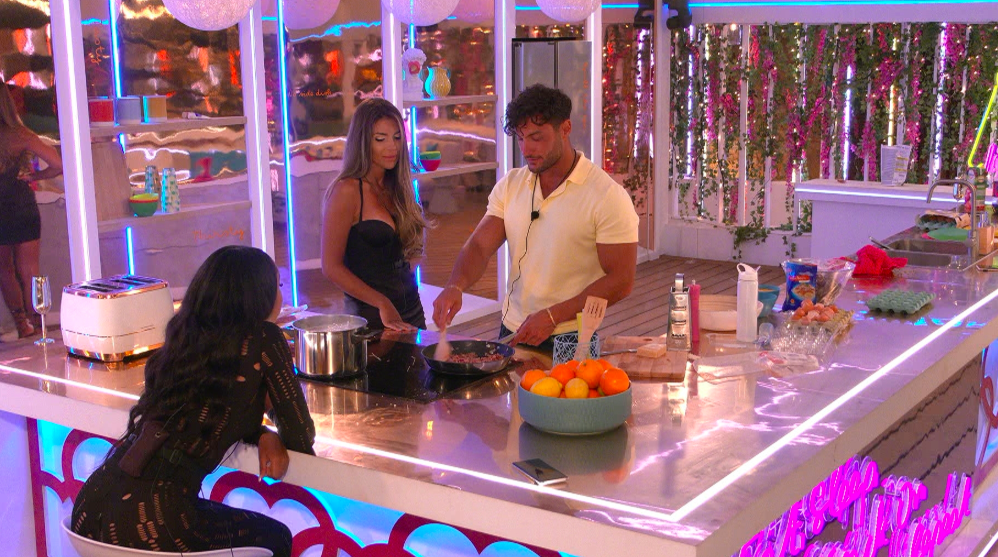 While some islanders loved the food, many didn’t like it too much. Casa Amor cast member Chyna Mills recently revealed that she lost weight during her time on the show as she finds food “sh*t”.

On her Instagram story, she said: “I barely ate in the villa that’s why I lost so much weight. Some nights were ok, I’m sure we had a kebab one evening. The lunch was crap.

“It’s sad but I’m getting my appetite back now, which is good. The food just wasn’t to my liking on some days – can’t say I didn’t eat every day, but you just couldn’t make it yourself if you didn’t like the food. food.

And former 2019 Islander Anna Vakili said in a recent interview with Closer that the food was “pretty basic”.

There is a confectionery 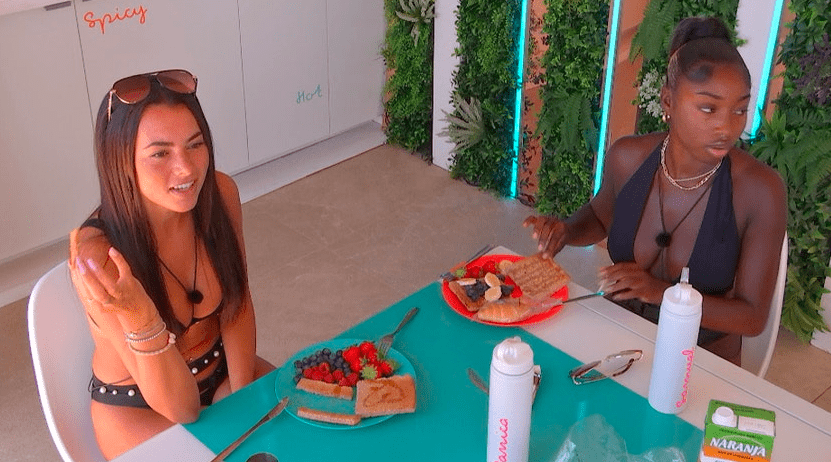 During the evenings, we often see the islanders having lots of snacks, and according to Jay Younger, there is a confectionery-style cupboard at the back of the kitchen.

In an interview with Digital Spy, Jay said: “Well, I don’t know if viewers know there’s a big cupboard of food behind the kitchen, so if you’re really hungry at night, all you you have to do is knock on that door and ask for what you want and it will be granted to you.

“Literally, whatever food you want, it’s there. For me, it was chocolate rice cakes. I love them at night or in cereal bowls. There’s a big food cupboard in there so if you want it, it’s right there.

They only get one drink a night 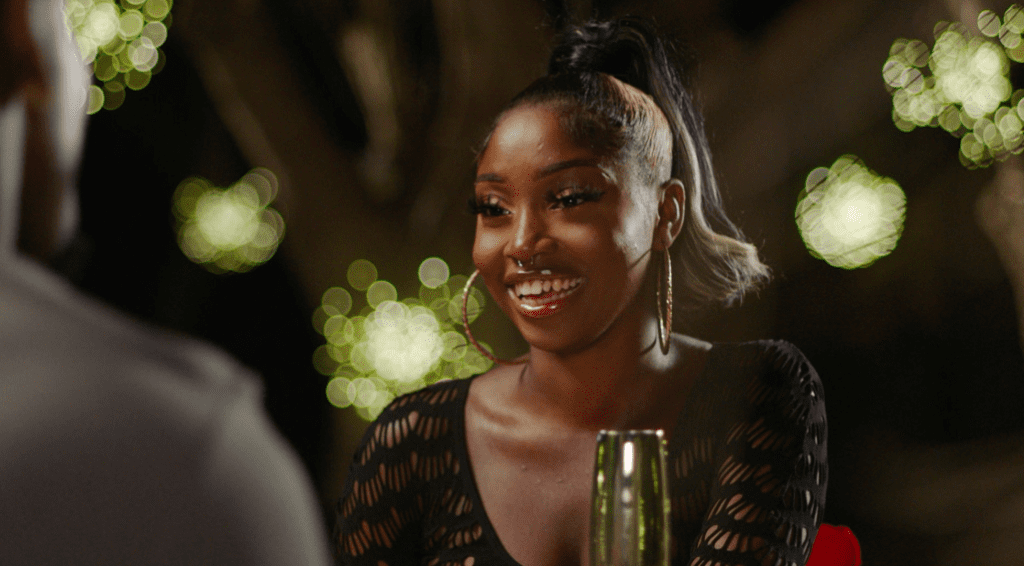 In Love Island, you hardly ever see the actors go on drunken rants and that’s probably because their alcohol levels are monitored.

A spokesperson for the show once said, “We provide our islanders with all necessary precautionary measures and all alcohol consumption is strictly monitored by our production team.”

And former Series 2 Islander Liana Isadora Van-Riel said the cast only got one or two drinks a night, and it was never just wine or beer. 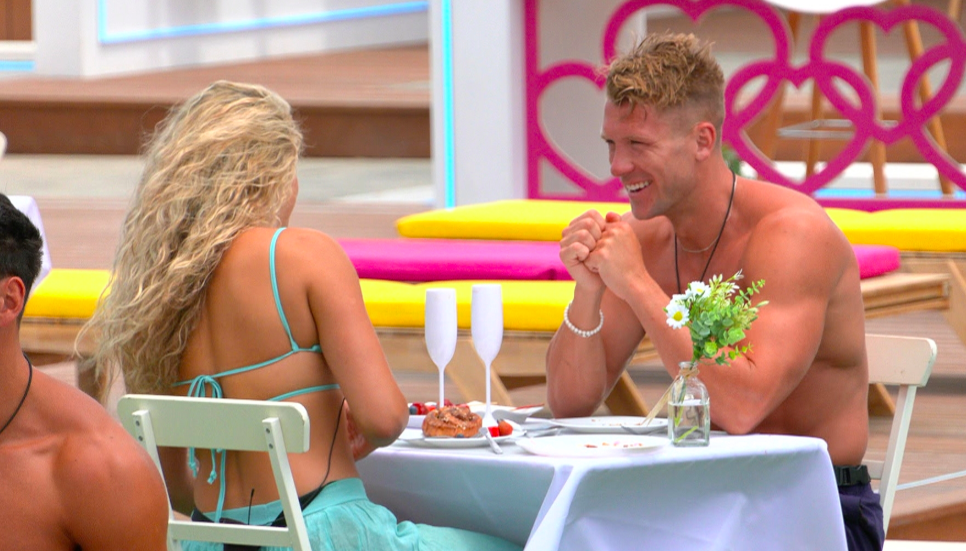 On Saturdays, islanders are given a treat and allowed to take away. 2020 Islander Callum Jones said OK! Magazine, they should vote as a group for what they wanted.

He said: “We had a choice of what we wanted, whether it was pizza or something like a burger, and then we had to decide as a group what to get.

“Luckily everyone was really open about what they wanted and there was never any disagreement about what we should get.”

This year, the Islanders had McDonalds and Chinese, Jay Younger said in an interview with Cosmopolitan.

McDonald’s seems to be a popular choice over the years as Chloe Burrows from last year said they would have it all the time and raved about the choices they could get in Mallorca which included loaded fries .

They have roast dinners on Sundays 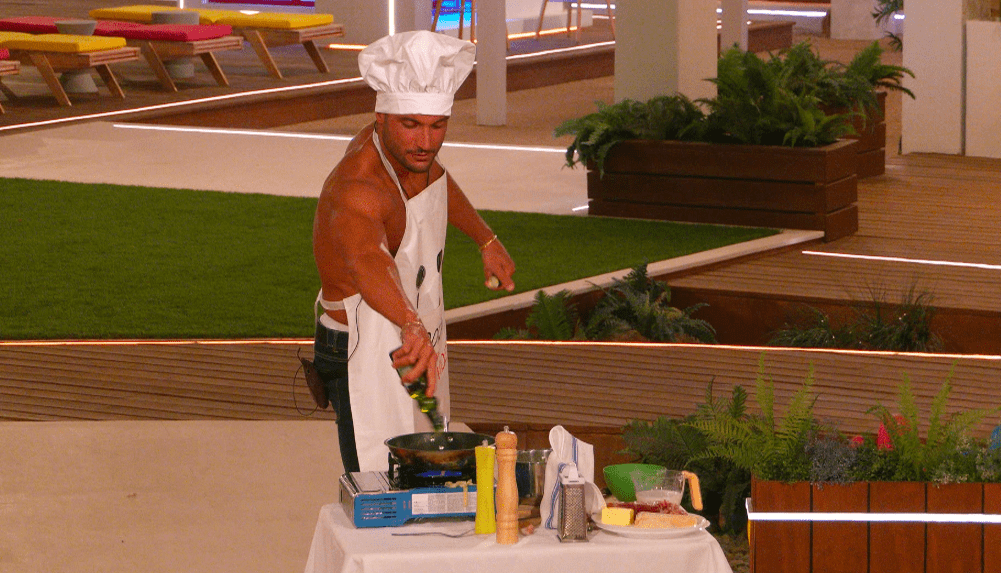 Not even the Spanish heat can stop a group of Brits from having their Sunday roasts in the villa, and the islanders are regularly treated to them every week.

However, Casa Amor contestants Jack Keating and Samuel Agbiji were unimpressed with the roast turkey they had.

In an interview with Closer, Jack said: “We literally had it as soon as we woke up. It was just a little too much to eat. I had a few bits of turkey and was ready for bed. Sam agreed with him and said “The roast wasn’t roasting.”

Love Island 2022 continues on ITV2 at 9pm tonight. For all the latest Love Island news and gossip and for the best memes and quizzes, like The Holy Church of Love Island on Facebook.

Related stories recommended by this writer:

• Take a peek inside this year’s Love Islanders boujie houses

• This is what the Love Islanders do, according to their LinkedIns

LOVE Island fans are digitally editing Kim Kardashian in the villa – since Luca Bish’s bold statement about her. The fishmonger insisted he was so happy with Gemma Owen that even the reality TV star’s arrival wouldn’t turn his head. 1 Love Island fans imagined what Kim Kardashian would look like in the villaCredit: Twitter […]

The Love Island series airs on June 28 and just under two weeks away – now all you need is something to keep you cool while watching the summer! Video loading Video unavailable The video will start automatically soon8to cancel play now MARCEL REUNITED WITH BLAZIN’ SQUAD AT LOVE ISLAND REUNION It’s not just the […]

A tearful Hugo Hammond was forced to apologize to his compatriot the island of love candidates after sparking a heated argument in the villa. The 24-year-old physical education teacher has angered a number of islanders after revealing his biggest disappointment was the “fake” personalities and appearances. Civil servant Sharon Gaffka, 25, and rentals manager Faye […]