Most of us are stuck in a seemingly endless heat wave, so now seems like a good time to remind everyone that fall is coming! We talk a lot about seaside cruises (Caribbean, Mexico, Mediterranean). But fall is fall foliage season in Northeast America, and it’s a beautiful trip.

Mr. Mills and I took a 9-night cruise to New England and Canada in 2018 for our 5th anniversary, and it still remains one of our port favorites. Otherwise, we mostly sailed to the Caribbean, and this cruise was so unique. In our land life, we are foodies and beer connoisseurs, so we really took that to heart when planning this one, and I even started calling it “The Beer Cruise”.

Keep in mind this was in 2018, so before Covid. Some companies and/or routes may have since changed. Thought it would be fun to reminisce about some fun browsing.

If you’re looking for something different, or just want to get away from all the heat, check out our “Beer Cruise” itinerary*.

Because we had booked the 9 night cruise, we departed from Cape Liberty. Some New England and Canada cruises skip this port and depart directly from Boston, and last 7 nights.

We flew into Newark airport and stayed at a nearby hotel. We took an Uber to the cruise port in the morning. I think the trip took maybe 10-15 minutes at most. Fairly unexciting boarding process.

We picked up our WOW groups at Boleros and then explored the ship. I almost missed sailaway, because I was down in the room for something, then I realized the ship was moving. I’ve never sprinted so many stairs so fast! I will never do that again!

Boston was the port we were most excited for before leaving, but also the one we were worried about for the first time sailing.

We started with a tour of the Boston Beer Company, the folks who make Sam Adams. If you’re in Boston and you’re a beer lover, this is a must.

The tour costs $10 and includes a guided tour of the brewery, a tasting of the flagship Boston Lager, current season, and exclusive R&D styling. I don’t know if they still do, but we also have to keep our tasting glasses. There is also a bar at the end where you can relax and drink more good Sam Adams beer.

We stayed for a drink and met another couple dressed in Houston Astros gear. We chatted with them and ended up sharing a taxi to Fenway, our next stop.

The other must-see in Boston is, of course, Fenway Park. We are huge baseball fans and make it our mission to visit every Major League Baseball park in the United States. Could we even consider missing a home game in Boston Harbor? Absolutely not. It was going to be tight though and we were only able to catch 4-5 innings before heading back to the ship. 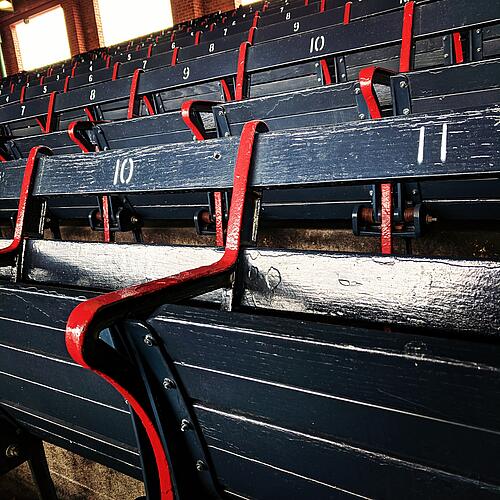 Still, sitting in those iconic lacquered bleachers and listening to the snap of the bat as the ball hurtled towards the green monster…we wouldn’t have given that up. Just keep an eye on your watch!

Next up was Portland, Maine – that’s really where The Beer Cruise’s beer came in.

I had booked us on the Maine Brew Bus, knowing that in a city so rich in breweries, we would never get there alone. It ended up being a great decision and we had a fantastic day. 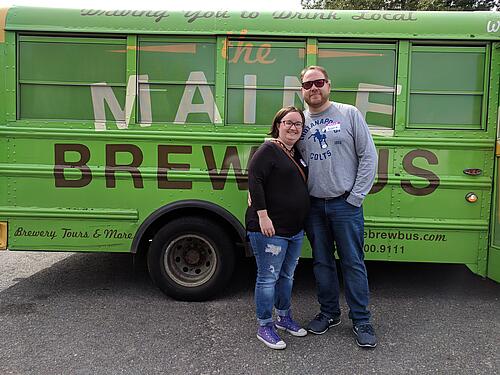 Not only did we not have to worry about transportation around town, but the Brew Bus works with breweries to ensure they arrive at the best time and provide a good experience for their customers.

For example, at Bissell Bros, which is a major hotspot and can have a massive line around the building, we were there before opening, to make sure we got the full attention of the staff. 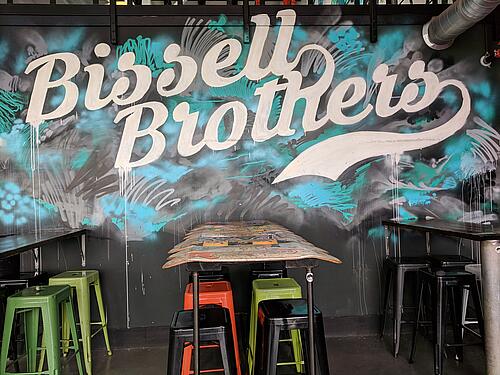 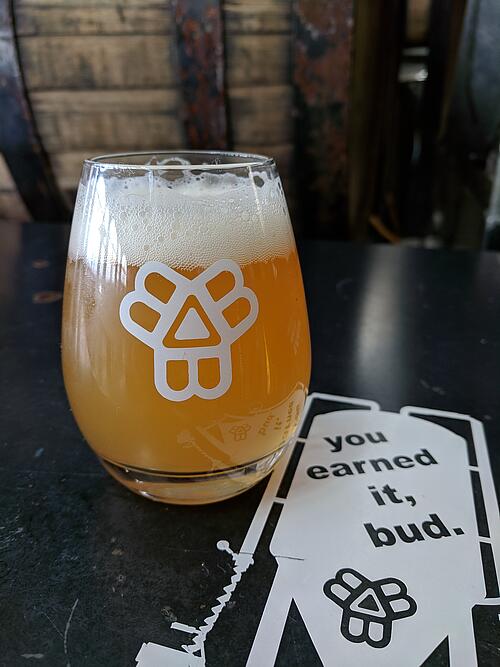 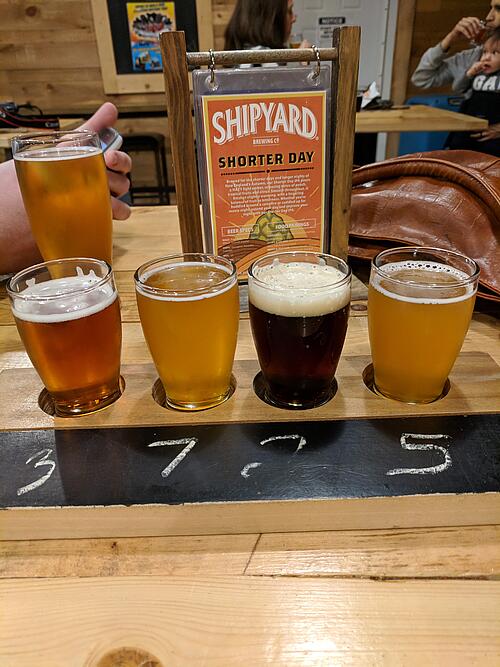 The breweries we visited:

I also had my first Lobster Roll (I’m from Indiana, okay? Don’t judge me!) in Portland, and oh, it was everything I had ever hoped for. Butter and carbs and tender lobster. I probably could have had 6 and been totally happy. 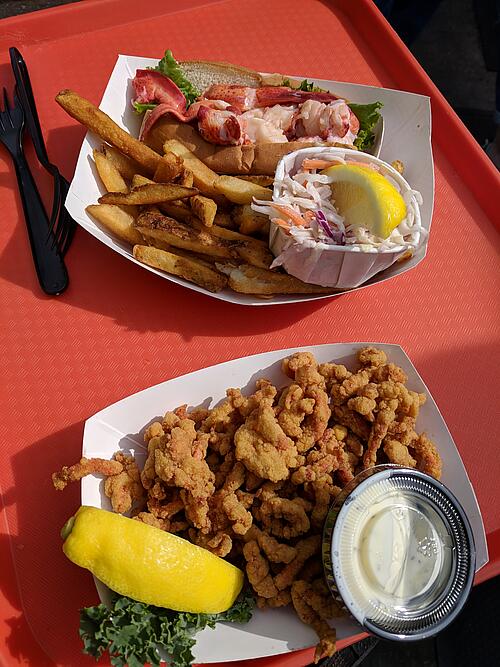 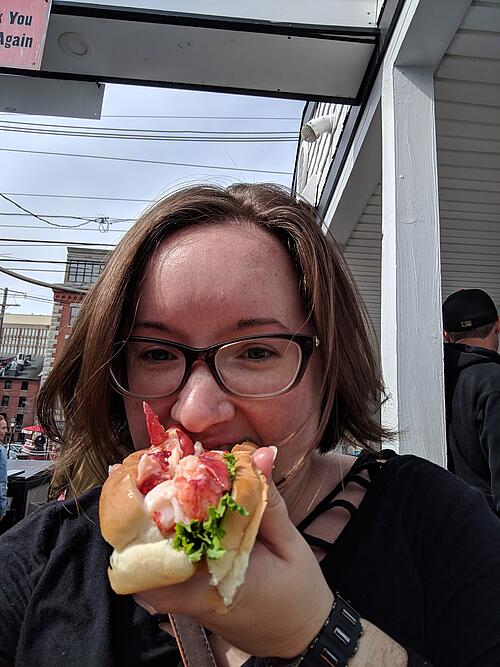 Highly recommend Portland Lobster Company if you are in the area.

Granted, Bar Harbor was probably our least favorite stop on the cruise, but we had a blast. It’s just a more touristy place, and since it’s an island, you’re a bit more limited on what you can do.

The most popular tours take you to the top of Cadillac Mountain, and we had booked a bus tour that went up for scenic views.

Took a few hours out of our morning, and while the view of the bay was stunning – if you get motion sickness, I can’t recommend this one. Maybe it was due to the beer round the day before, but we were definitely more nauseous than usual on this bus ride. 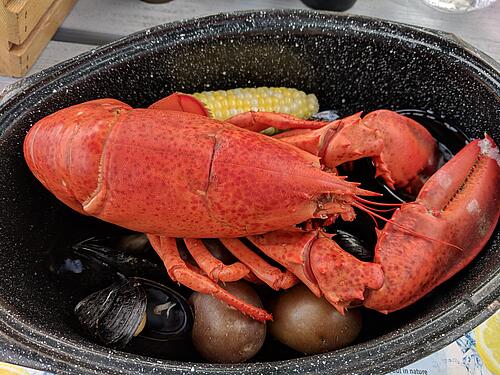 After the visit was over, we walked around the city a bit and had something to eat. I couldn’t visit Maine without having at least one whole lobster, as I had never eaten one (again…we’re from a landlocked state), so we stopped at Stewman’s Lobster Pound for lunch. 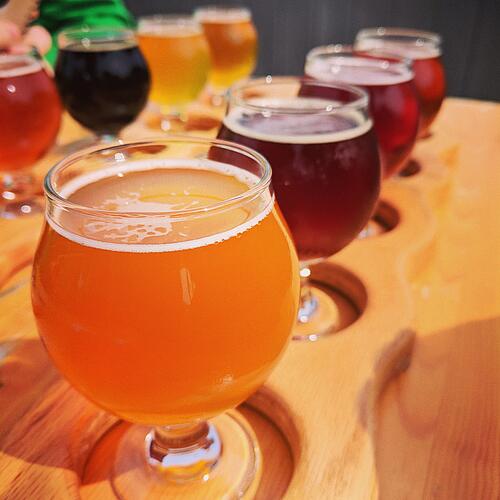 It was fun to separate the shellfish – definitely a little messy, though, and I think I’d rather do it for myself! We arrived at Atlantic Brewing for a quick flight, before it returned to the ship.

After several ports in New England, we crossed the border into Canada. Halifax is such a historic city, and while we were doing a pub crawl, there was certainly no shortage of things to see.

Our crawl was on tour by Royal Caribbean, and we were given tickets to various bars and restaurants in town. We had the option of getting on a trolleybus, but Halifax is quite walkable, although hilly!

If you are able bodied I would walk and enjoy the sights along the way, although I will admit I took the bus to give my tired legs a break. 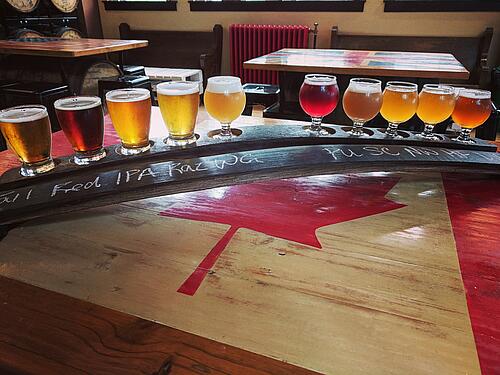 Before we started our exploration, we started at Garrison Brewery, just by the harbor. It ended up being our most memorable beer joint of the trip, and we’re still talking about going back 5 years later. They serve their flights on beer keg litters, and they aren’t short-term either.

The beers were very varied, ranging from IPAs and stouts to a margarita sour way before its time. There was a spruce beer we had to take home. A simply excellent and well made infusion that is a must for all fermented fanatics. 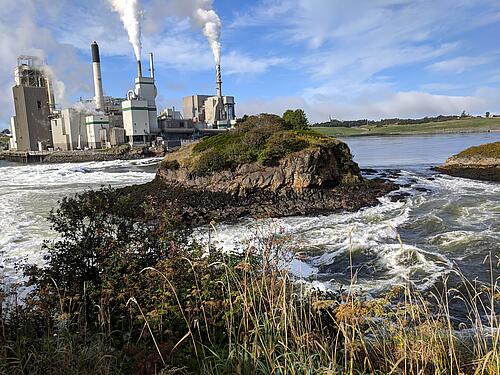 The exploration included some historic bars in Halifax, as well as some newer options. We even visited Alexander Keith’s, which is one of the oldest continuously operating breweries in North America.

This was the only port where we didn’t go to a brewery, but did have an all day excursion. On your first visit to St. John’s, there’s really only one thing you can do, and that’s go to the reversing rapids. 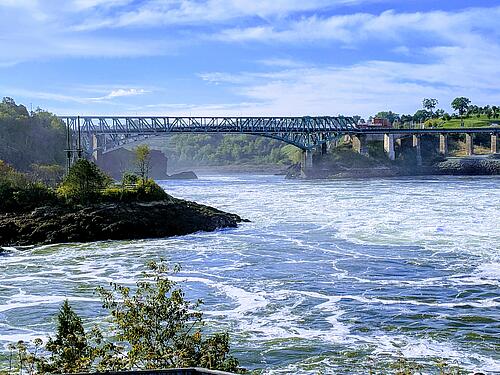 This is a natural phenomenon caused by the extreme tidal flow in the area. Because it’s such a violent tide, it causes the Saint John River to flow in two opposite directions, depending on the time of day! We got to see it both times, and it really showed how powerful nature can be. 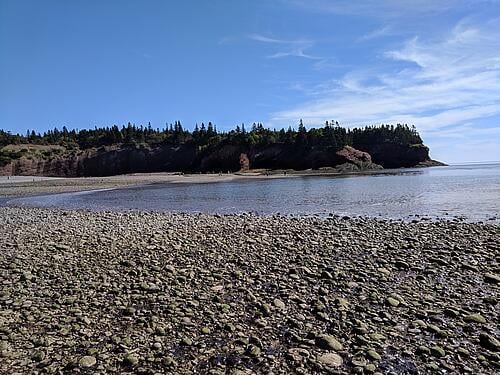 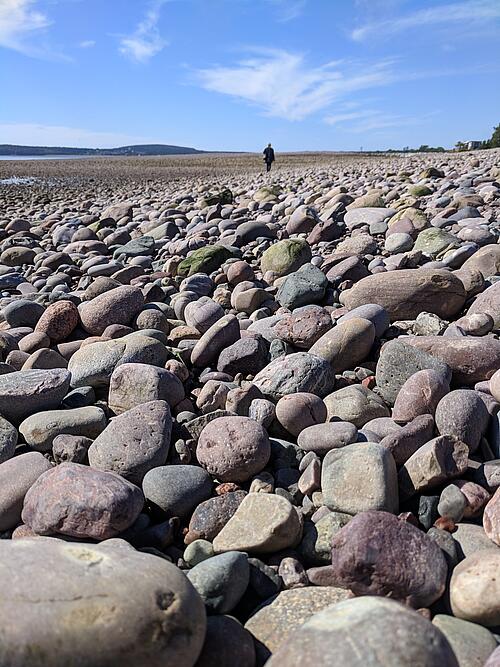 We also got to see the tide come in quickly at the Bay of Fundy, where we had lunch before returning to see the rapids a second time. Along the way, you’ll see the river at low tide and high tide, and it’s really cool to see such drastic changes.

Final thoughts on this itinerary: Because we did our New England/Canada cruise in September, there were very few children on board. The crowd was fewer families and over 50+.

Because that was the dynamic, the activities weren’t like the typical Royal Caribbean lineup we were used to. It was definitely geared more towards a more upscale, older audience.

Less poppy, child-friendly and more art and culture. I imagine it varies if you take this cruise during busy holiday weeks, but just something to keep in mind. Otherwise, we loved the port stops and would do this cruise again without hesitation.

LOU’ANA Tāmaki-based artist Makaurau and his seven-piece band hit the road this winter to serve up his soul funk grooves with a dose of magick. Having carved out a niche for themselves within Auckland’s vibrant music community over the past 7 years. Lou’ana’s voice carries the stature of an old soul; a cosmic cocktail of […]

Stage 2 – Roskilde to Nyborg – 202.2km – Saturday July 2 One of the longest stages of this year’s race, the Tour’s first road stage begins on the island of Zealand and ends across the Great Belt strait on the island of Funen. The day begins in Roskilde, home of the famous rock festival […]